Cellgevity – The Ultimate in Glutathione Enhancement!

The ULTIMATE in Glutathione Enhancement

Cellgevity™ gives your body the health and wellness support it deserves by providing the breakthrough compound RiboCeine™ and 12 other scientifically proven synergistic ingredients to enhance the production of glutathione and its vital role in supporting cellular function, removing harmful toxins, and neutralizing free radical damage in the body.

Cellgevity’s RiboCeine, a proprietary compound, has significantly outperformed all other means of glutathione enhancement against which it has been tested.

Every cell in your body is assaulted by destructive agents such as free radicals, chemical toxins, heavy metals, and radiation that damage the cell, inhibit optimum function, and accelerate the aging process and the onset and progression of the diseases and issues associated with aging.

Glutathione is the master protector of the cell and defends the cell from these destructive agents.

Over 100,000 scientific studies and articles on Glutathione are recorded in PubMed, the official U.S. Government library of medical research.

Those articles reveal the remarkable role glutathione plays in the protection and function of every cell in the human body and the support of optimal health and function.

They also show the terrible consequences of low glutathione levels, and how those lower levels accelerate the aging process and increase vulnerability to the issues of aging. 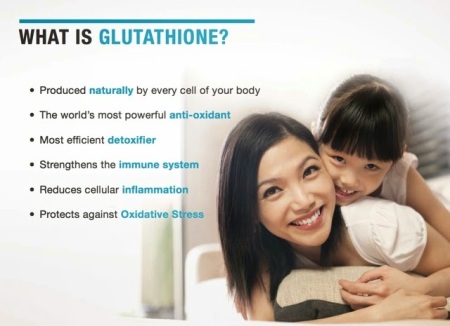 A – Antioxidant:  Body’s premier neutralizer of all types of free radicals.
I  – Immune System Enhancer: Protects and regulates immune cells.
D – Detoxifier: One of the primary ways the body eliminates toxic environmental chemicals 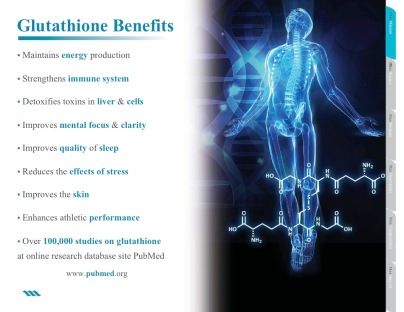 PROBLEM!!! Your Glutathione Levels are Decreasing, But the Attacks on Your Cells are Not!

Naturally, from Age 20, there is a 10-15% decline in glutathione levels every decade!

The continued exposure to toxins, free radicals, radiation, and heavy metals can lower our levels of glutathione.

This continued exposure causes cells to lose their optimum function.

As the cells are damaged, the aging process and all of its issues accelerate.

Energy levels fall, inflammation levels increase and all of the cells, tissues, and organs pay the price.

On top of this, injuries, infections, and diseases further deplete glutathione levels.

Although scientists have known for decades about the health benefits of glutathione, the challenge has been how to safely and effectively increase glutathione levels.

However, Dr. Herbert T. Nagasawa was able to develop a revolutionary molecule known as RiboCeine that effectively delivers cysteine to the cell to support the natural production of glutathione–for which Max International was awarded a U.S. Patent.

RiboCeine is a unique molecule that combines ribose and cysteine, nutrients that occur naturally in our bodies.

RiboCeine once ingested will be absorbed, enters the bloodstream, and delivers cysteine and ribose to the cells, supporting glutathione production as well as providing ribose, an integral part of ATP, our cells’ natural fuel and source of energy.

RiboCeine significantly outperformed other means of glutathione enhancement against which it has been tested.

It has been the subject of twenty- two scientific studies funded by the National Institutes of Health or other scientific funding agencies and published in peer-reviewed journals.

RiboCeine is based on 25 years of scientific research and was developed by the world-renowned research scientist and medicinal chemist, Herbert T. Nagasawa, Ph.D.

Dr. Nagasawa was a Professor of Medicinal Chemistry and Toxicology at the University of Minnesota for forty years and was also Senior Career Research Scientist for the Veterans Administration in Minneapolis. For thirty-two of those years, he was Senior Editor of the Journal of Medicinal Chemistry.

What does cellgevity do in the body?

How To Join Max International In Kaduna

What’s the difference between Cellgevity and other Supplements?

Message Us On WhatsApp

Powered by
Hello,
Kindly connect with us on WhatsApp so we can help you better.